Aunty Jen: My Search for Approval 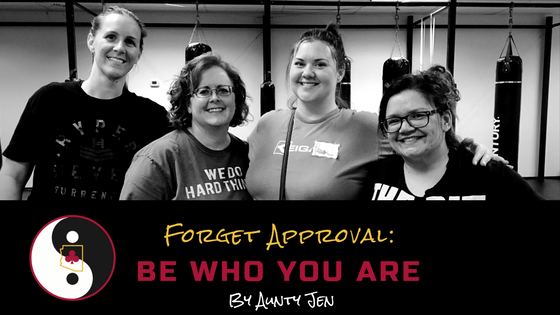 I typically fly under the radar but like every one on earth, I want to be accepted.   My need for acceptance and approval has stopped me from taking some growth opportunities over my 50 plus years , as I have feared not being successful or being liked.

Some of my accomplishments in life are easy to measure in terms of approval and well worth the effort.  Being awarded a college degree after 130 hours of coursework. Being hired after interviewing for a position is another. Even having that black belt wrapped around my waist was an approval of my technique, skills and abilities as a martial artist.

When I talk to our students I always tell them that their martial arts journey is all about what they think or feel about themselves. I truly believe and advise others to not worry what others think about you. Don’t compare and don’t compete.

Yet I struggle with this myself on a daily basis. Being human can be hard especially when we are hard on ourselves….thinking we aren’t impressive enough, or our kicks aren’t high enough or whatever the negative thoughts lead us to.

I love food and cooking and have tried out for the television show “Master Chef” twice.  Logically, I know this is a search for approval of my culinary skills (and maybe a little desire to meet Gordon Ramsay).  Putting myself “out there” for the audition is nerve-racking.  Having my friends and family tell me that I am great cook did not seem to be enough.

At my second audition they told me my signature dish was awesome. It earned me a one-on-one 90-minute meeting with one of the executive producers who gave me some behind-the-scenes info…basically a recipe for who I needed to become to be on the show (look younger, get a tattoo, be rude, talk crude, dress differently – basically get more attention).

For the past few months I thought a lot about my willingness to do “what it takes” to be on the show in case I got the call to report to Los Angeles for the next level.    Sure the money is appealing but most of all being told I am good enough is the draw.

To seek approval of others and land the Master Chef gig, I asked myself: Would I be willing to change my outward appearance or personality to have someone try my food? Could I maintain being someone else in order to get that approval?  Could I master the art of telling people what they wanted to hear and being someone they would find impressive? All the while I was worrying incessantly about what others would think of me, fearing criticism. Talk about anxiety!

They never called, so I never had to really decide I guess.  Recently people have asked if I was going to try out again.  If you had asked me on Friday, I might have said yes. Because I seek approval.

There’s a dish I make for my family affectionately called “Beef Stuff.”  I know, stupid name but there is really no other name to call it.  My mother learned how to make it from my dad’s mom, who suffered a massive stroke and died when I was 4-years old.  My own mother died from cancer in 1986 when I was 19.  To my father this dish represents his childhood, his mother (he was definitely a momma’s boy) and his beloved wife.

Unfortunately, my mother never gave me all the secrets to this dish. It’s a LOT of work when you know how to make it and a TON of work if you don’t.  For the past 31 years, I have plugged along easily spending literally hundreds of hours making some horrible batches, some better and some pretty dang good…all based on my scattered memories of seeing my mom make it, as well as my taste memory.

It would have been easy to give up and just say the secret of the Beef Stuff died with Grandma Emmy or my mom, Karen. I made a batch three years ago so my dad could take some on his trip to Salt Lake City to see family.  I remember it clearly – it was the easiest batch I have ever made.  It totally came together, no issues on prep, no worry it was going to be right. I cooked it, served it and enjoyed making it.  My family loved it. “Best ever Mom.”

And I realized, even after all the dishes were done and the accolades, that I truly love making the Beef Stuff.  I can’t imagine not making it for holidays and birthdays.

My dad took some Beef Stuff to his sister this weekend. Aunt Marianne, like my Grandpa, never made Beef Stuff because she said it was too hard.

Marianne doesn’t have a lot of time left on earth, she can’t talk well anymore and has a full-time nurse due to old age and illness.  The phone rang Saturday and it was my Uncle (who is now gone) calling saying “Your aunt wants to talk to you. I hope you can understand her.”  He handed her the phone.  For a couple of minutes, all I heard was breathing.

“Hi Aunt Marianne. How are you?”

“Good.” Her voice is soft and her German accent is thick.

“Are you having a good day?”

“Thank you for the food your dad brought me.” It was a big effort for her to speak.
“Did you like it?”

I was floored. “Really?”

“Thank you for bringing her to me.”

At that moment, any need I have had about being told I am a good cook, being accepted by “professional” chefs, or having my food loved was GONE.  Somewhere in my search for approval by someone who doesn’t even know me, I lost the true goal of all of it.

E.E. Cummings said, “It takes courage to grow up and become who you really are.”

What you see is what you get with me.  Don’t bother calling me, Master Chef to be on your show. I know I am a phenomenal cook.  I know more about cooking than 99% of the average joe.  You will definitely love my food and I will win every challenge you give me.   But I am not going to change myself to be anyone other than the boring 51-year old, mom of two, with the same guy for 33-years, black belt.

I accept that. Happily. I am happy with being me.

So Kaju AZ students, I repeat: don’t compare or compete.  Do Kajukenbo for the love of it.  For you. It’s worth it.

Aunty Jennifer Corder, an Arizona native, is co-owner of Kajukenbo Arizona with her husband Professor Kelly Corder, and sons Sifu Nicolas and Sibak Cameron. She graduated from Arizona State University with a degree in Family Resources and Human Development. She is a black belt in Kajukenbo with over 15 years of martial arts and self-defense training. She and her husband also founded Redrock Software Corporation in 1991 and enjoys working with her family in both businesses.

Come Try a Class at Our New Location!