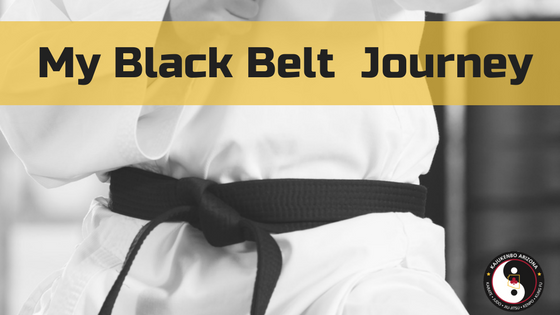 My temporal journey to black belt began in the summer of 2009 when I first stepped foot in the Kaju AZ Mesa dojo. It was five years from the age of thirteen to the age of eighteen, ten belts from white to black, eight pretests, and ten belt tests. Over this course of time I learned twelve of nearly every technique: forms, self-defense, and grappling. There are many measurable aspects of my black belt journey. Being a black belt, and a martial artist in general, however, is not about being able to put things together in a list. It is about self-improvement and it relies heavily on the effort you put forth into attaining your goal.

An analogy I have come up with for this is the belt. Not the rank or knowledge associated with a belt level, but the physical band that is often tied around a gi. When I first walked through the doors of Kajukenbo I was presented with a brand new white belt, identical to every other new white belt and waiting to be broken in. As I began training, the belt began to form to my body and became differentiated with sweat and dirt. And when I was ready to move on, I received a brand new yellow belt, again, identical to every other new yellow belt. This is a never-ending process at Kaju AZ, but it represents what I’m trying to say. The black belt journey is less about the belts and more about the journey. A greater portion of time in martial arts is dedicated to training rather than testing. The crisp newness of each belt right after promotion is representative of this, and serves as a reminder that there is always more to learn, always more to the journey. This is how I choose to view my black belt, as both a reflection on the past and a challenge to future opportunities.

Some of the goals I set earlier on in my training were to improve my confidence and physical endurance, and become a more disciplined leader. While I can say I’ve certainly noticed progress in these areas, I’ve also developed a greater appreciation for the art and for all the time and effort that has gone in to the synthesis of Kajukenbo curriculum under which I train. As a black belt in the system I have come to realize how high the Kajukenbo standard has been set by black belts before me. As a black belt and especially as a Kajukenbo black belt I know there will be more expected from me and I will be challenged to uphold this standard as I share my knowledge with others.

Lastly, in reflecting on my Kajukenbo journey, I must express my gratitude to the Corder family, Sifu Dolly Abad, and other mentors who have pushed me up to this point. I would also like to thank the entire Kaju AZ Ohana for supporting me in countless ways, whether by working directly with me, being an uki at my belt tests, or even allowing me to teach you in a class. And finally I would like to thank my family for training with me and encouraging me in everything I do.

Come Try a Class at Our New Location!